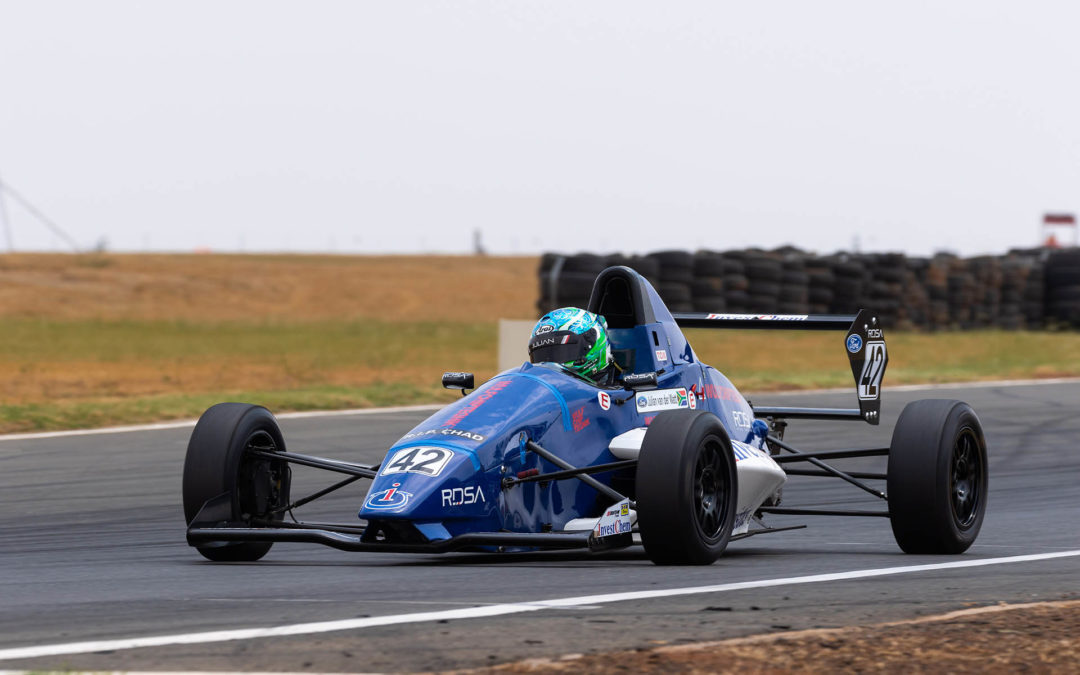 The final round of the 2019 Investchem SA National Formula 1600 championship at Red Star Raceway outside Delmas over the past weekend, promised an intriguing battle for second between the man who has been there most of the year, Nicholas van Weely and former champion Julian van der Watt, who has been dominant since his midseason return.

Were van der Watt to win both races on Saturday with a pole position and a fastest lap and if newly champion Scott Temple was still in town, it was plausible for him to pull it off, as van Weely would have to end second in one of the races to stem the van der Watt tide. That was however something that had not happened since Julian’s return as he and Scott have had the top steps all to themselves in the second half.

Van Weely’s job was however made considerably easier when Temple opted to skip the final weekend and head to England a week early to prepare for his Walter Hayes Formula Ford Festival champion’s prize drive at Silverstone next weekend, meaning Nicholas simply had to follow Julian home to wrap it up. And that is exactly what went down — van der Watt rolled off pole position, two race wins and two fastest laps to score another perfect weekend as van Weely kept a watching brief in second all the way, to secure his title second behind Temple and ahead of van der Watt.

The opening race went to form up front as van der Watt trotted off, setting the new Red Star lap record en route to a 6 second win over van Weely, who did exactly what he needed to in second, while Mankonkwana had a just as lonely run to second. Rebelo passed Schofield on the opening tour and stayed there to the finish, while young Vos put in the drive of the race to come from the back to pass Gillespie for sixth by mid distance. Cetinich took Class B in 8th ahead of Tracey and Antwan Geldenhuys, who fought back to tenth after an early off as he made his way through a battle between Edwards, Goolam, Meyer and his dad.

Race 2 went down in much the same manner with van der Watt making off up front and van Weely holding station to be 7 seconds adrift at the flag to wrap up that title second — the best was just not enough from Julian who must settle for a close third in the championship. Not bad considering he only raced the second half of the season. Mankonkwana and Schofield entertained for a few laps as they diced for third, while Rebelo overcame Gillespie early on and then benefited fourth when Schofield stopped.

Vos made it a double drive of the day, once again storming from the back before ultimately nicking fifth from Gillespie at around half distance, with Gillespie next up ahead of Class B winner and champion Ivana Cetinich, Antwan Geldenhuys, Edwards who recovered after a first lap slip, Tracey and Goolam. The dice of the day was between senior statesmen Allen Meyer and Org Geldenhuys, who delivered a splendid wheel-to-wheel dice to the flag resolved in Meyers favour on the final tour.

So van der Watt took a dominant win for the day, but that was not enough to steal second in the championship from second man on the day too, van Weely. Mankonkwana was third on the day to cement fourth in the title race behind Rebelo, while Schofield dropped to fifth in the final championship ahead of Gillespie, Andrew Rackstraw, Vos, Stuart White, Gerard Geldenhuys and Class B champion, the lovely Ivana Cetinich.

It all kicks off again in April 2020 when the new SA national Formula 1600 championship commences in April 2020.