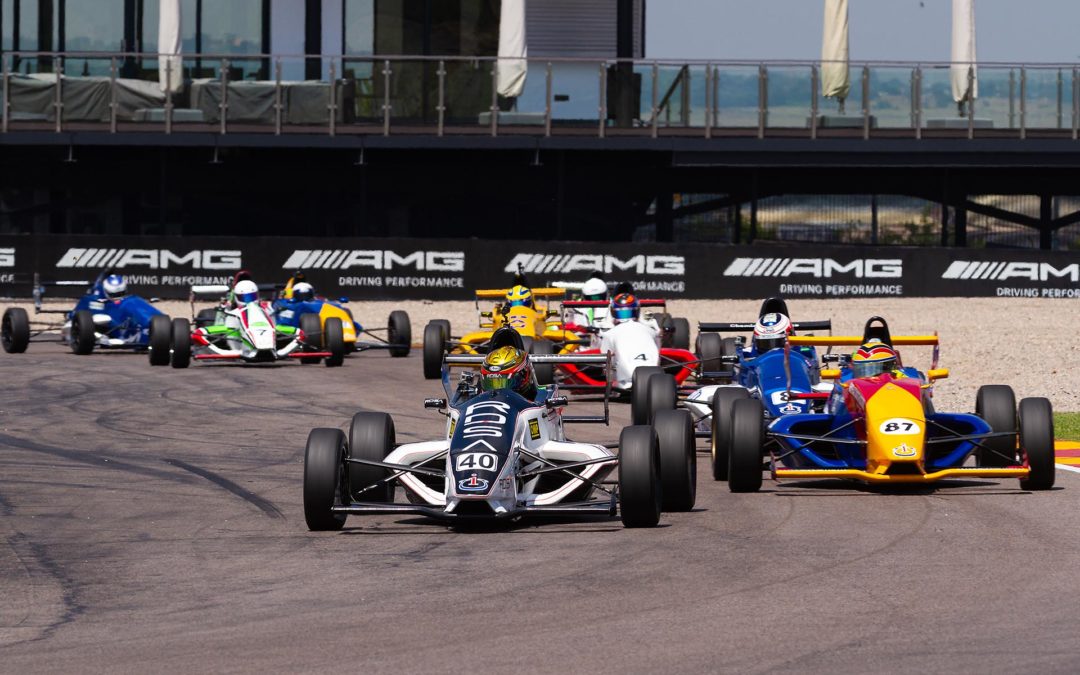 The opening round of the 2020 Investchem Formula 1600 championship delivered some cracking action and three different winners in the three races at Zwartkops outside Pretoria on Saturday. Nicholas van Weely, Andrew Rackstraw and series boss Ian Schofield, all three took a chance at winning in a splendid day of racing that also saw a few stunning rookie performances and in Schofield’s case, a first race in what some say is 28 years!
Cape Town lad Andrew Rackstraw converted impressive practice pace into a pair of pole positions for the first two races by posting the two quickest qualifying laps aboard his Investchem/RDSA Mygale albeit just a tenth quicker than double series runner-up over the past two years, Nicholas van Weely’s Magnificent Paints & Hardware van Diemen in race 1. Andrew Schofield (Investchem Mygale) lined up third ahead of Tiago Rebelo (TRMS Mygale) and Gerard Geldenhuys (Abacus Divisions Mygale) in race 2.
There was a most pleasant surprise in seventh on the grid as 14-year old ex-karter Jarrod Waberski, who only scraped through his race licensing requirements on Thursday, banged his DAW Racing Mygale onto the fourth row alongside another youngster Alex Vos (Ecurie Zoo van Diemen) and one of the oldest men on the grid, Class B pole man Ian Schofield (Investchem Mygale). Antwan Geldenhuys (Abacus Divisions Mygale), Zac Edwards (Mygale), Ewan Holtzhausen (Total Plastics/Bee Tee Mygale), Zaeem Goolam (Dictator Mygale), Brendan Tracey (Investchem Mygale) and class B duo, lady racer Ivana Cetinich (Alpha Universal) and Allen Meyer (van Diemen RF) made up the grid.
Rackstraw led the first race for a few laps, but a little error let van Weely through to rake the win. Behind them, Andrew Schofield ended third from Rebelo and Gerard Geldenhuys, with the drive of the race coming from young Waberski in sixth ahead of Antwan Geldenhuys, Edwards, Vos, Holtzhausen, Class B winner Cetinich back in the groove, Meyer and Goolam as Tracey and Ian Schofield hit trouble.
Rackstraw made no mistakes second time around as he charged off to a two and a half second win over van Weely in a less eventful heat, while Tiago Rebelo got one back on Andrew Schofield for third, with Gerard Geldenhuys fifth from Vos, Antwan Geldenhuys, a recovered Class B winner Ian Schofield, youngsters Waberski, Edwards and Goolam and Cetinich. Holtzhausen and Meyer followed while Tracey struggled to a stop with what looked like engine electrical issues. 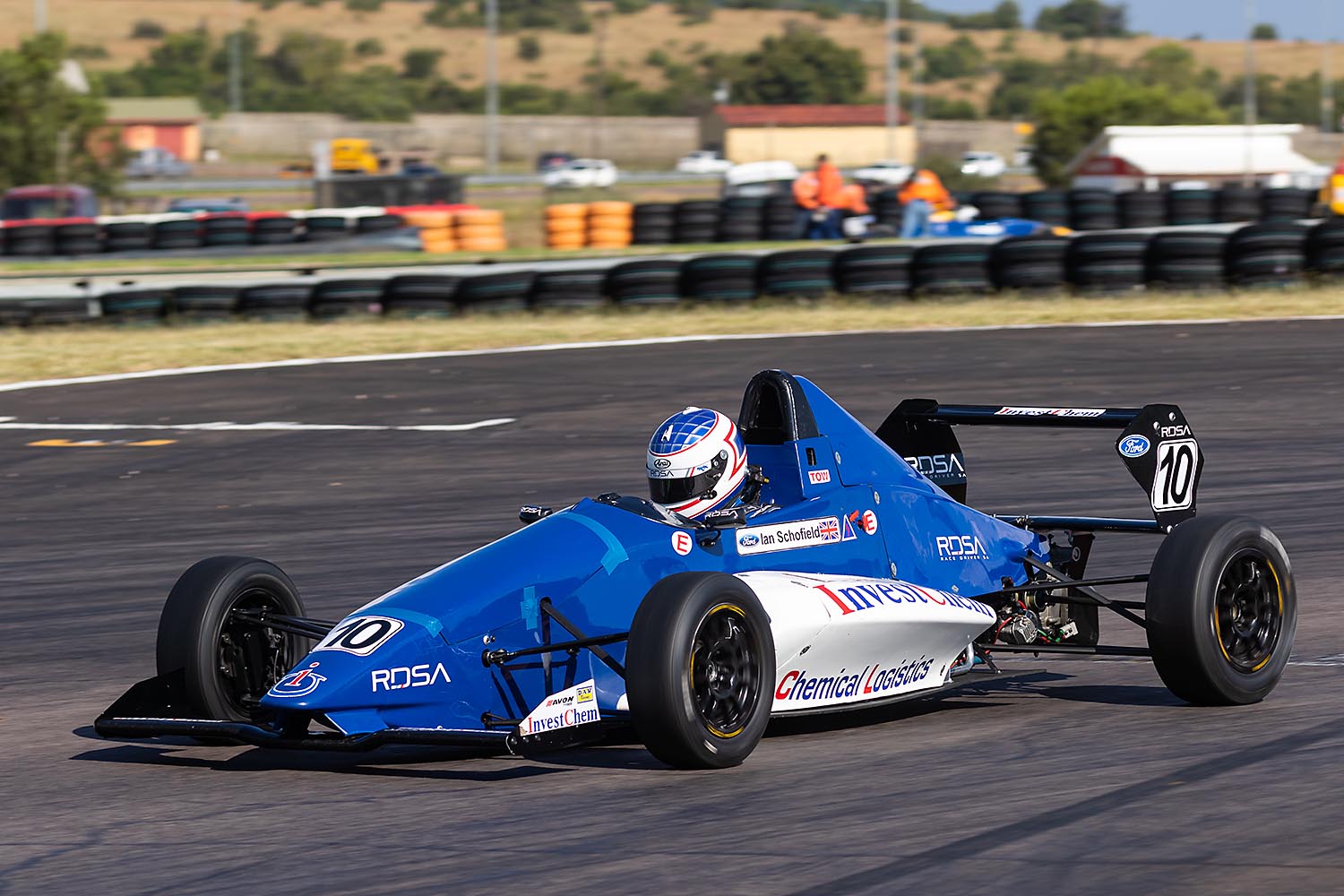 The first-ever third race on an Investchem F1600 raceday also brought the added novelty of a reversed grid for the top eight, which meant Ian Schofield was on pole from Vos and Gerhard Geldenhuys and there was already mayhem in Turn 2, but Schofield emerged in the lead from Antwan Geldenhuys, Rackstraw, Gerard Geldenhuys and a feisty Waberski, who soon moved up to fifth albeit while bending his car’s nose cone. Rackstraw’s charge ended when he went straight on and stopped off the table top Turn 5 and his car was almost collected when Gerard Geldenhuys lost it and ended embedded in the gravel trap.
All of which left a delighted Ian Schofield to take his first race win since before independence from an equally thrilled Antwan Geldenhuys and a stunning, fighting performance from young Jarrod Waberski, who held van Weely and Rebelo off for a brilliant debut main circuit race podium.  Next up was another impressive youngster in Goolam from Edwards, Cetinich, Meyer and Holtzhausen, with Gerard Geldenhuys, Rackstraw and the still struggling Tracey next up.
Overall, van Weely took the day from Rebelo, Antwan Geldenhuys and Waberski, Edwards, Goolam, Holtzhausen, Gerard Geldenhuys and  Rackstraw, while Cetinich took Class B honours. And after a crazy day where all drivers except the troubled Tracey scored points and provisionally, Nicholas van Weely went home from Zwartkops in a slender four point championship lead over Andrew Rackstraw, with Tiago Rebelo three points behind. Antwan Geldenhuys is next up with Ian and Andrew Schofield and Jarrod Waberski tied in fifth ahead of Gerard Geldenhuys.
Whether or not the second round of the championship happens as scheduled at Killarney on 18 April, remains to be seen in the face of likely Coronavirus restrictions.