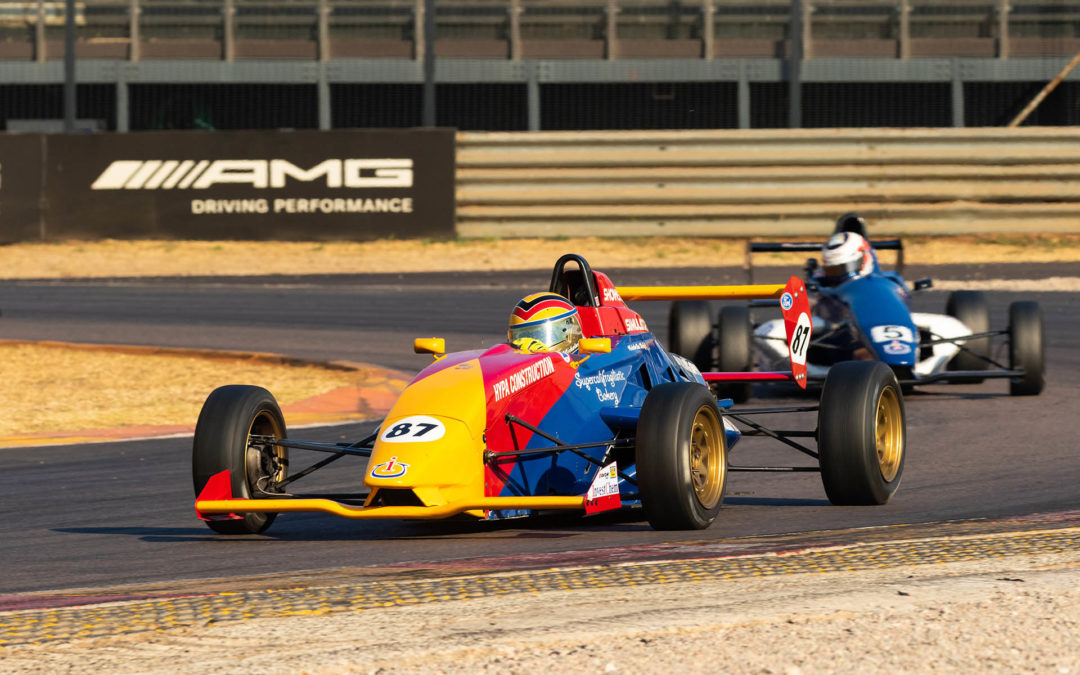 Whatever happens in this year’s Investchem Formula 1600 championship, South Africa’s premier wings and slicks race series will crown a new champion in 2020. With last year’s champion Scott Temple and his predecessors Stuart White and Julian van der Watt, both of whom also had a part in the 2019 chase, off to seek greener racing pastures, it leaves the way open for a new name to be etched on that champion’s trophy come the end of this season.
All of which means that the double 2018 and 2019 Investchem Formula 1600 runner up Nicholas van Weely and his Magnificent Paints & Hardware van Diemen RF06 will line up as favourite when the season gets underway at Zwartkops outside Pretoria on Saturday 14 March. Van Weely has been a regular frontrunner and race winner over the past two seasons, but that does not mean he will just walk away with it and he has a couple of young guns and few veterans to deal with if he wants that title this year.
Jozi racer Tiago Rebelo (TRM Brian Kruger Racing Mygale) and Cape Town lad Andrew Rackstraw (Investchem RDSA Mygale) may both be relatively damp behind the ear, but both have impressive karting pedigrees and following a couple of seasons each in F1600, they are already a major factor, especially with the plucky Rackstraw also having won several F1600 races too.
Another championship candidate is Formula 1600 veteran Andrew Schofield (Investchem Mygale), while Ivana Cetinich (Alpha Universal REB Fantastic Racing Mygale) may be in Class B by virtue of her being a lady racer, but this karting lass has a pedigree longer and at least as successful as her young rivals Rackstraw and Rebelo and her presence brings a mighty extra slice of interest in Investchem Formula 1600.
Ivana’s fellow 2019 rookies Alex Vos (DV Building Supplies Ecurie Zoo van Diemen), Zac Edwards (SCM Brian Kruger Racing Mygale) and Abacus Divisions brothers Antwan Geldenhuys and Gerard Geldenhuys will also be looking to take a step up in their F1600 second years, while series regular Brendan Tracey simply cannot wait to start his new season.
Zaeem Goolam (Brian Kruger Racing Mygale SJ) will be happy to have a race under his belt late last year, while fellow rookies, 14-year old karter Jarrod Waberski, who brings his dad and grandad’s famous yellow DAW Racing colours back on his Mygale, and Ewan Holtzhausen will be keen to impress on their F1600 debuts. And never ignore Investchem Formula 1600 Class B pensioners, Ian Schofield (Investchem Mygale SJ) and Allen Meyer (Investchem van Diemen RF07) who may be old, but they are quick and have plenty old tricks up their sleeves too!
The Investchem Formula 1600 championship will also reward its champions like never before in 2020, with the champion earning a cool quarter-million rand and test drives in both an international Formula Renault racer and a South African championship GTC tin-top racer. Second in the championship will earn R125K and a GTC test, with the third-placed driver taking R62K and a GTC test, while the fourth, fifth and sixth-placed drivers will take R30K, R15K and R10K home, respectively.
Investchem Formula 1600 races identical 1600cc Ford-powered single-seaters complete with airfoil wings, slick tyres and sequential gearboxes in the perfect training ground for budding drivers with big racing plans. Tightly controlled rules and identical cars deliver a level playing field to not only favour the quickest driver but to also reward the most adept at setting up their cars and working as a team. Run over eight rounds at South Africa’s premier circuits, the action starts at Zwartkops outside Pretoria March 14