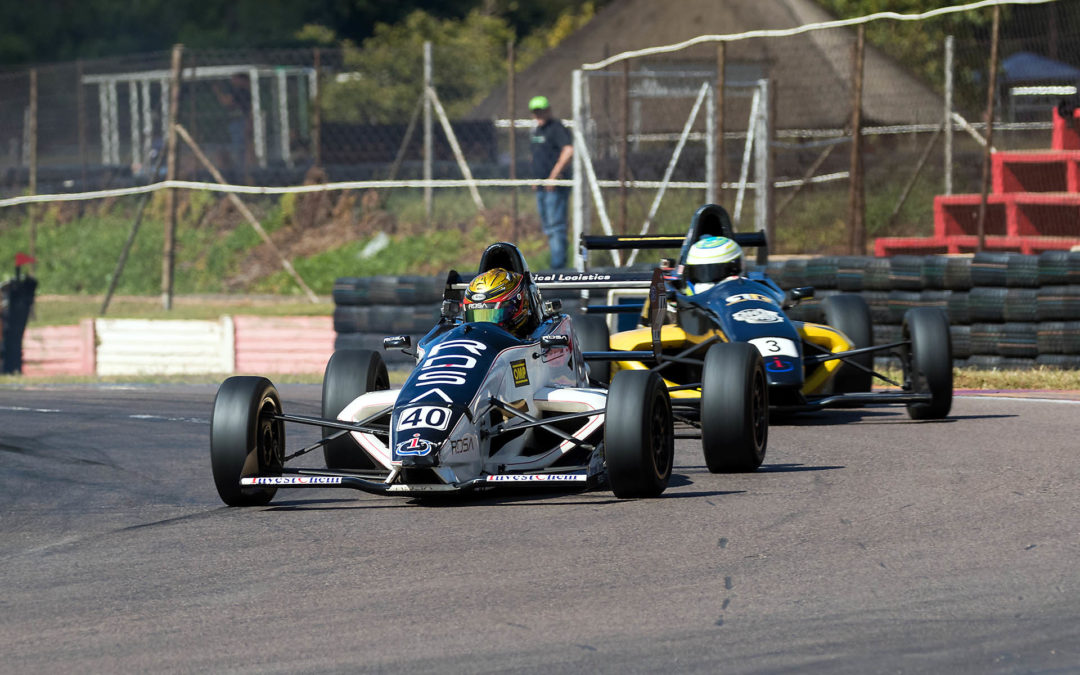 The Investchem South African Formula 1600 championship is headed for Cape Town’s Killarney International Raceway for rounds 5 and 6 on Saturday 11 May with championship leader Scott Temple in a strong championship lead. His closest rival Nicholas van Weely and most impressive local lad Andrew Rackstraw are however hell bent on stemming Temple’s tide.

Temple took advantage of Rackstraw’s first race jump start to power his Road To Race/1st Race Mygale to double victories at Zwartkops last time out. That allowed him to establish an iron grip on the championship chase with a 14-point advantage over the ever-present van Weely’s Magnificent Paints & Hardware and van Diemen headed to the Cape.

But it’s young Rackstraw who promises to be the biggest thorn in Temple’s side — home hero Andrew has had his fair share of bad luck with that jumped start and a first round first lap incident. But Andrew has also won a race this year and will be racing his Investchem-Race Driver SA Mygale on a track he knows very well thanks to regular outings in a Formula Ford 1600 machine in Libre races at Killarney regionals, so he should have a good Cape Town ace or two up his sleeve.

Series regular Andrew Schofield sits fourth in the title race following a steady season so far in his Investchem Mygale, three points clear of another young gun, Namibian ace Siyabonga Mankonkwana (Investchem Cervinia Mygale), but the dice for sixth behind them is nothing short of extreme.

Gerard Geldenhuys, the surprise star of the last meeting at Zwartkops and another young charger, Tiago Rebelo (TRMS Mygale) both sit on even points with young lady racer and Class B leader Ivana Cetinich, who will miss the cape race, but another rising star Liam Pienaar (Phoenix Jewellers Mygale) a single point adrift and just one point clear of the best of the Class B dagga boys, David Jermy (Beauty Factory Fantastic Racing Mygale).

Another F1600 regular Alex Gillespie (ERP Trucking Components Mygale), who has had a relatively quiet start to his season and rookie Alex Vos (Ecurie Zoo van Diemen) are next up ahead of Class B veterans Allen Meyer (van Diemen), while Zac Edwards (SCM Mygale) will be keen to turn his improving pace into points down in the Cape.

All the Investchem Formula 1600 action goes down at Killarney on Saturday 11 May, so if you are in the Cape over the weekend, make a note of it and head over to the Extreme festival races — something pretty special to look forward to.