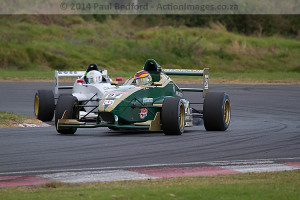 The Midas South African Single-Seaters field did not disappoint in delivering racing action at round four of their national championship in East London. Both races saw tough battles for dominance in both the Formula Volkswagen and Midas Formula 1600 categories.

The big shake-up for the Formula Volkswagen field is the change in the championship lead. Arriving in East London, it was Robert Wolk (1 – Midas / Chemical Logistics / ATE) at the head of the field but after the event it is Nicholas van Weely (87 – Anglorand) who has a strong lead.

Wolk arrived at round four nursing an injury to his foot which, at best, made driving uncomfortable. This did not slow him down in qualifying where he featured at the top of the timesheets. In race one Wolk’s fortunes took a turn and he failed to finish, completing just three of the 10 laps. A broken engine not only prevented him from finishing the first race, but from even taking the start line of race two – which left him with just the two points for posting the best qualifying.

Van Weely suffered no such issues, claiming the first race victory and following that up in a drama filled race two with another successful run at the chequered flag to finish first overall for the day – and the championship lead.

The Safety Car was deployed during the second race to allow marshals to clear debris from an incident between series newcomer Matthew Swanepoel (34 – Investchem) and Jason Campos (19 – Hollard Insurance). Behind Van Weely it was Werner Scholtz (3 – Motorvia / Investchem) who claimed second place overall on the day – moving up into third place overall in the championship in the process and forcing Campos out of the top three with a narrow margin.

This sets the scene for an explosive round five at Phakisa in August as the jostling for championship positions will now begin in earnest.

The battle for fourth

The Midas Formula 1600 field might be a bit slower around the circuit than he circuit than their 2.0 litre Formula Volkswagen counterparts, but what they lack in pace they more than make up for in excitement.
A battle between Scott Temple (3 – Investchem) and Keegan Campos (2 – Hollard Insurance) saw the pair neck-and-neck throughout the day, with constant challenges and defensive maneouvres as they fought for position.

Graham Hepburn (4 – Suburban Body Shop) finished each of the races in third place with a pitched battle between Dean Venter (77 – Turnfab Engineer), Bevan Williams (36 – Rightway Auto-Electrical) and Andrew Horne (33 – Xena Chemicals / Investchem) taking place behind him. Numerous position changes later, it was Venter who crossed the line for fourth, followed by Horne. Williams unfortunately broke his gear lever and had to settle for 11th.

Class B of the Formula 1600 category saw Rick Morris (08 – Investchem) and Ian Schofield (09 – Investchem) fighting it out. The two have had several pitched battles this season, creating much excitement and nailbiting moments as each seems determined to push that little bit harder than the other in order to get ahead.

The South African Single Seater field heads to Phakisa for round five of the national championship on Saturday, August 2, where the battle continues as the the halfway mark and gets down to the serious business of sorting out has a chance at championship titles this year.