Nash back on top at Red Star 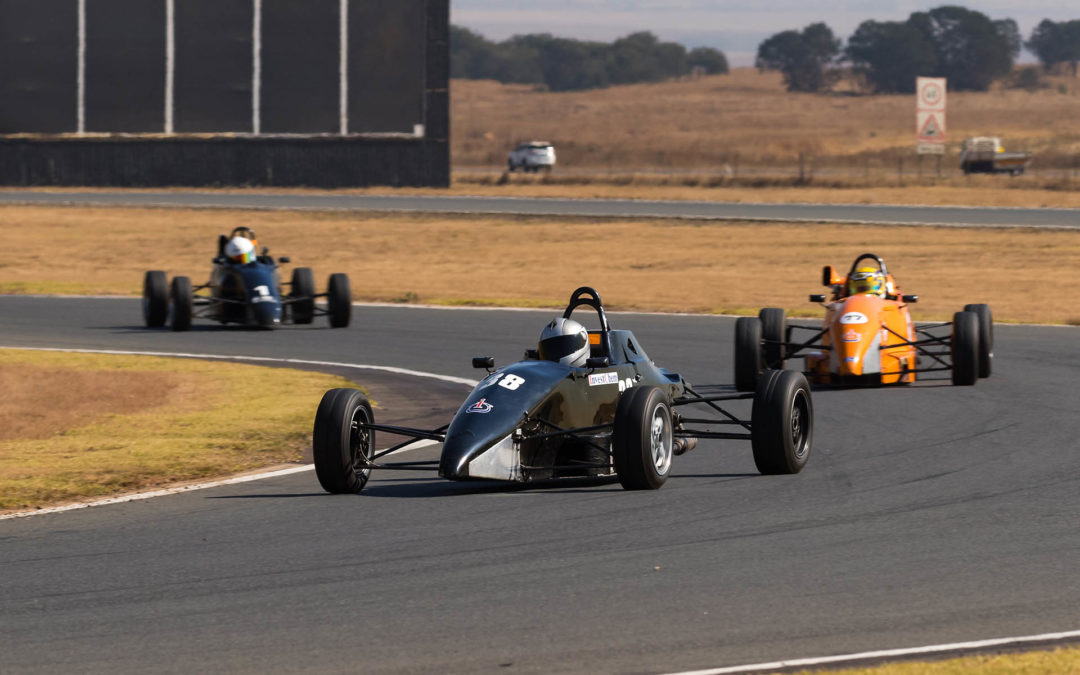 On Friday, 21 June Jonathan Nash didn’t have a motor in his Turnfab Engineering Swift and it looked like he was going to miss the third round of the 2019 Investchem Formula Ford Kent championship at Red Star Raceway. Things looked better later in the day thanks to the generosity of a fellow competitor who lent him a spare motor. Nash was able to make it out for qualifying on a chilly Saturday morning and was immediately on the pace, taking second place in the session behind championship leader Dean Venter (Gulf SA Swift) and then going on to win both races.

Behind Venter and Nash, David Jermy (Expensive Habits van Diemen) was next on the grid with James Reeves (Ray) alongside him in fourth. Matt Nash (Royale) and Duncan Vos (Ecurie Zoo Swift) occupied the third row with Paul Gerber (Pablo Clark Ray) and Steve Venter (Gulf SA Swift) rounding out the top eight.

There was immediate drama at the start of the first heat. While Jonathan Nash grabbed the lead from Dean Venter, further down a gap that Gerber headed into closed, resulting in contact between him and Matt Nash. While Gerber was able to continue, albeit, at the back of the field, Nash’s day was over. A five-way battle at the front of the field became a three-way fight as Nash, Dean Venter and Jermy slowly pulled away from Vos and Reeves. Shortly after half-distance, Jermy moved past Venter into second, but couldn’t find a way around Nash who hung on to take the win by just over half a second. Venter was a few car lengths back in third. The dice between Vos and Reeves was an entertaining affair but was spoilt when Reeves’ Swift developed a misfire just as he found a way through on Vos. This allowed Vos to take fourth while Reeves had to settle for fifth. Gerber fought his way through from the back of the field after his start line incident to claim sixth ahead of Graham Vos (Ecurie Zoo van Diemen) and Steve Venter.

Nash again grabbed the lead from the start in the second race, this time followed by Jermy and Venter. Nash and Jermy slowly opened a gap at the front, but a mistake by Jermy at half-distance saw him spin and drop down the field. This left Nash with a comfortable lead over Venter which he held until the flag. Vos and Reeves resumed their first heat battle, with Vos leading in the early stages before Reeves made a move that stuck. Unfortunately for Reeves, the misfire that plagued him in the first race returned and he dropped down the field, allowing Vos to take the final podium position. A recovering Jermy got past Reeves on the final lap to take fourth with Allen Meyer (van Diemen) in sixth. Gerber, whose right front wishbone broke on the penultimate lap probably as a result of his first race incident, was the final classified finisher in seventh, despite ending the race in the Delmas undergrowth.

Two wins for Nash gave him overall victory on the day with Venter and Jermy joining him on the podium.

The series now takes a winter break before the Investchem Formula Ford Kent drivers return to the track at Zwartkops Raceway on Saturday, 7 September.