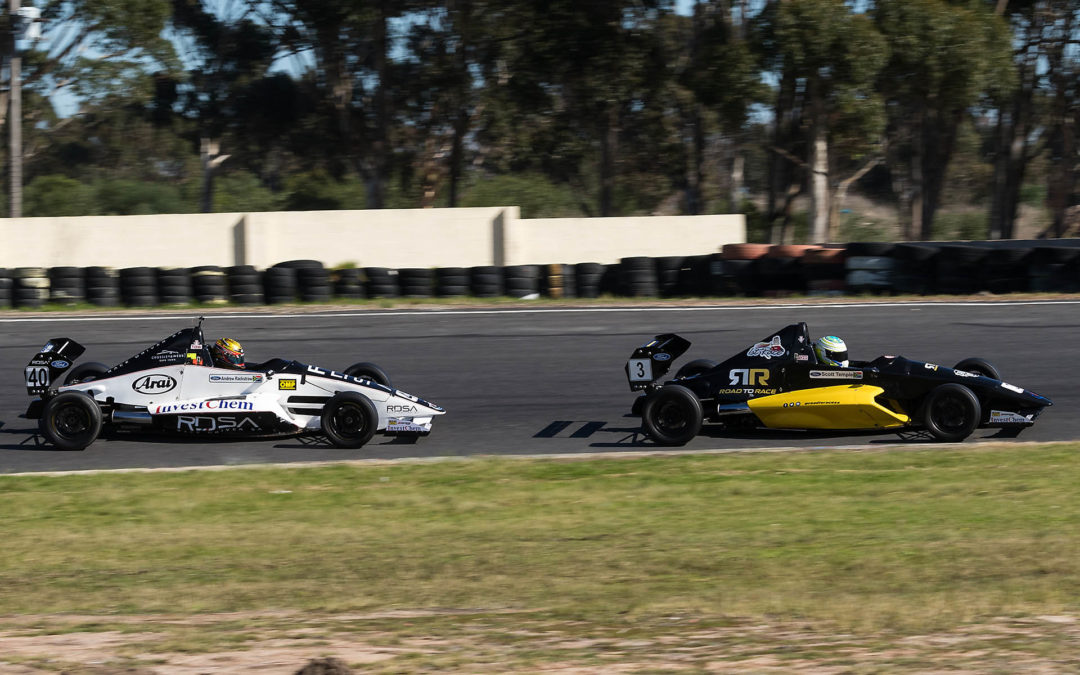 Saturday’s Killarney races were possibly decisive in the outcome of the 2019 Investchem Formula 1600 title, when championship leader Scott Temple stormed to double pole positions and race wins to extend his championship advantage to beyond the points scored by two race wins. But as much as it was a triumph for the Johannesburg racer, it was tragedy for local hero and title contender Andrew Rackstraw, who lost his second race win of the year to a jumped start…

The weekend started on the front foot for Temple, who took advantage of Rackstraw missing most of Friday to matric commitments at school to put his championship leading Road To Race/1st Race Mygale on pole position for both races ahead of young Andrew’s Investchem RDSA Mygale.

There was drama in Class B when Ian Schofield took ill Saturday morning and vacated his Investchem Mygale, which cockpit was most impressively occupied by Claudio Piazzo Musso, who happened to have his race kit at the circuit. He ended ninth on the grid ahead of his also wildcard step-son, Tristan de Nobrega’s Fantastic Racing RDSA Mygale, rookies Alex Vos’s Ecurie Zoo van Diemen and Zac Edwards’ SCM Mygale and Class B madalas, Mark Lauth’s Fantastic Racing Mygale and Allen Meyer in his van Diemen.

Scott Temple led away, but was forced to defend aggressively to keep local hero Andrew Rackstraw at bay, with the youngster all of two-tenths of a second adrift at the flag. Van Weely could only watch his rivals draw away, but there was quite a bit of action behind as Rebelo and Mankonkwana both found a way past Andrew Schofield, only for Schofield to suffer a sizeable accident as he stuffed his Mygale into the Turn 4 tyre wall.

That left de Nobrega to emerge sixth ahead of an entertaining mid-pack tussle ahead of Gillespie and wildcard former champion Piazzo Musso, who used his vast experience to great effect to pull off a fine start but slowly dropped back to end up eighth to take Class B honours ahead of Geldenhuys, Class B second man Lauth, Edwards and Meyer after young Vos retired.

As far as the Killarney crowd was concerned, local Cape hero Andrew Rackstraw delivered a brilliant if close lights to flag win over Temple in race 2, with van Weely once again keeping an albeit distant watching brief. But it was not quite as it seemed as Andrew knew all along that it was not to be — the young local hero’s clutch had grabbed at the start and he could not prevent the car from creeping to be penalised 30 seconds for another jumped start, to allow Temple to score another double win ahead of van Weely.

Rebelo thus moved up to a podium third ahead of Mankonkwana, Gillespie, the impressive Class B wildcard Piazza Musso, de Nobrega, Vos, the penalised Rackstraw in ninth, Geldenhuys, Lauth, Edwards and Meyer. So Temple ultimately dominated again to take the day from van Weely, Rebelo, Mankonkwana, Rackstraw and Gillespie to move into a powerful title lead over van Weely and Rackstraw and the tussling Mankonkwana and Rebelo, while the absent Ivana Cetinich retained her Class B title advantage.

The 2019 Investchem Formula 1600 championship now moves on to its mid-season date at Aldo Scribante in Port Elizabeth Saturday 15 June.