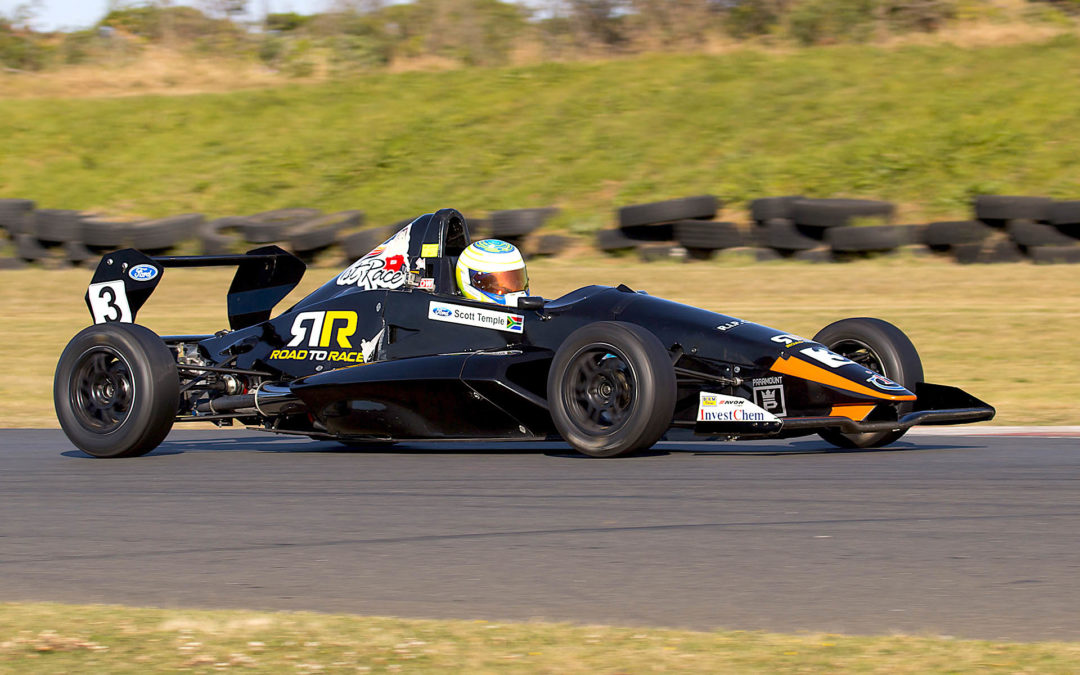 Scott Temple is the 2019 Investchem Formula 1600 champion. Temple overcame the challenge of former champion Julian van der Watt to win the opening race in East London on Saturday, before following his rival home to establish an unbeatable points tally after title rival, Nicholas van Weely ground to a halt from third in the second race.

The Grand Prix Circuit Formula 1600 battle was always going to be thrilling, with Temple (Road to Race/1st Race Mygale) facing up to van der Watt (Investchem/Wulfchiptegnik Mygale), who made a winning return at the previous round. It seemed more of the same was in order as van der Watt took pole position with a 1 minute 24.723 second lap, half a second clear of Temple to set up a clash of the titans.

The first race delivered exactly what the weekend had promised when Temple and van der Watt fought a race-long duel and Temple showed his mettle to defeat his challenger by all of a tenth of a second. Scott did not need to beat Julian in his championship quest, but the racer in him clearly thought otherwise.

Van Weely had a grandstand seat of the action ahead as he followed home a second behind in third to keep his fading title hopes alive, comfortably clear of a midfield scrap headed by title rivals Rebelo and Mankonkwana, with Gillespie next up following a tight tussle with Schofield and the impressive Vos. Geldenhuys brothers Gerard and Antwan were next home chased by Edwards and Tracey after de Nobrega stopped on the second tour.

Van der Watt then returned to his winning ways to beat Temple home in the second race, but there was a twist as van Weely stopped from third after three laps, leaving Temple to follow van der Watt home to clinch a well earned Investchem 2019 South African Formula 1600 championship. Rebelo ended third from Gillespie, Mankonkwana and Schofield, with Antwan Geldenhuys wrapping up a fine debut in seventh from Vos, de Nobrega and Tracey in tenth ahead of Gerard Geldenhuys and Edwards.

So, champion Temple leads van Weely and Rebelo in the title race, with van der Watt incredibly up to fourth in the chase ahead of Schofield, Andrew Rackstraw and Mankonkwana. The focus over the final four races now shifts to two significant points — the gloves off fight between new champion Temple and 2017 champion van der Watt up front.

The other highlight is the tussle for the title second — at his current trajectory, it may be difficult to stop van der Watt from stealing it in spite of him starting his challenge two-thirds into the season. Next stop is Killarney in Cape Town on 28 September. Light blue touch paper and step back five paces…